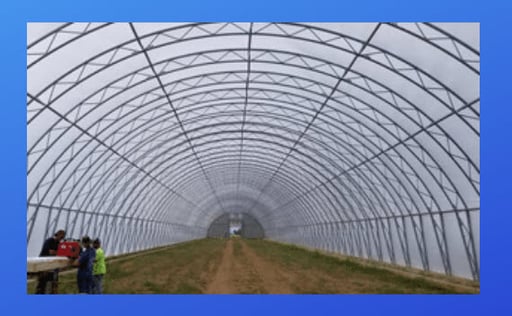 Not all greenhouse films are the same!

SolaWrap greenhouse plastic sheeting stands out from the other polyethylene films because of how it is built! It's the bubbles! Its construction principle consisting of the bubbles, the keder and the connector prevents any leaks or thermal bridges, so that up to 95% of the heat radiation can be retained. This distinctive insulation properties (thermal conductivity value of 3.3 W/sq.m.K) offers a high level if efficiency. This energy savings saves you money!

The Greenhouse With High Resilience To Snow and Wind 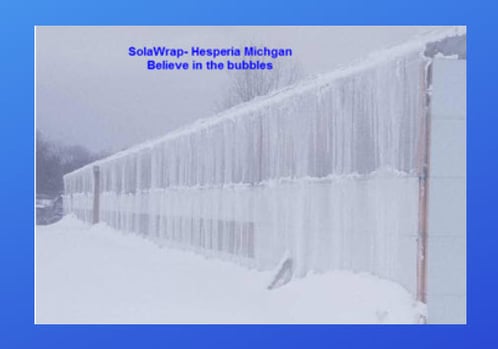 So many products on the greenhouse market have failures when they are hit with a bad snow, wind, or hail storm. SolaWrap can withstand the standardized drop weight test without any consequences. This is achieved by sectioning off the roof with heavy duty connectors that hold SolaWrap greenhouse plastic sheets in place. Even “Lothar”, the storm of the century in 1999, had no adverse effects on the film.

Unlike most poly greenhouse plastics on the market, SolaWrap guarantees the ten-year UV stability at 100 Kly/y. Even under the most severe climatic conditions, no changes in color or clouding will occur, and the film will not weaken in any way.

Easy Installation- "SolaWrap- the one and done film"!

In many cases you will only install SolaWrap one time. Sleep at night if there is a storm knowing your greenhouse film will still be in place and your crop will be safe when you cover with SolaWrap. During installation just slide the 4', 5' or 6' strips of SolaWrap into the connectors and easily cut the film with a knife or scissors  The low weight of the strips of keder glide right along the track. 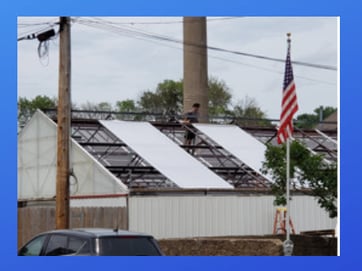 Customer Question: Is it true that polyethylene degrades when in comes in contact with PVC? Is there a barrier between the SolaWrap and the PVC connector?

SolaWrap Answer:  Your question is absolutely correct.  The key is how the structure or contact points vent or off gas.  In the case of our proprietary connection system, it vents 100% of the time and does not hold gas or off gas that comes from PVC.  Our PVC connectors are also stabilized and are a special blend that reduces this effect.
If you look at our connectors it is an open system so nothing is held back in the way of pocketing.  Most PVC buildings, where you see this occur, happens when the gas is trapped by the film and has a chance to enter the films physical structure.

Give us a call and get a sample of the film, a connector and a brochure. See for yourself why SolaWrap is popping up across the world.