About the Greenhouse Plastic Of the Future! 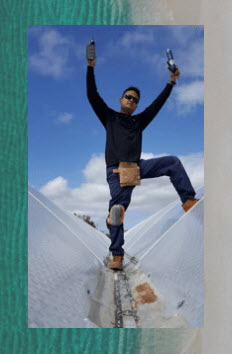 SolaWrap  The Greenhouse Cover with the Bubbles!

How it all began – a true story we feared was but a fairy-tale that turned into the birth of SolaWrap.

Ken Aguilar,  head of our Agricultural division was helping an aquaponics customer with an innovative liner for his troughs.  This customer had a very small piece of a bubble-based film, and asked Ken if he knew anything about it.

This customer got this playing card sized sample from someone overseas from a person he had been sharing aquaponics information with.  Both wanted to know where they could buy such a product, because the tales about this film seemed hard to believe.

These tales claimed this clear film lasted for 20, even 30 years in harsh environments, withstood very high winds, huge snow loads, but best of all, the plants grown in these houses were the best anywhere.  Problem was, this film was only available in Germany, and only if you had one of two builders build your greenhouse!!

Ken jumped to the challenge, ran down the product, and next thing we knew, he was on a multi-day tour of greenhouses in Germany.  Each roll of the film had date stamps along the edges, and these rolls were truly 15-30 years old.

In a greenhouse that had been vandalized, Ken stood and looked at the old film compared to that which was replaced following the vandalism.  He could not see the difference in the film.  How was this possible??  He then found a small patch in an old section of the film, hit it, and the tape broke into a thousand shards.  The film around it still strong as can be.

Ken likes to say he drank the Kool-aid on that trip and lots of it!  We all know it was really tall dark beers, and his German companions would surely vouch for that fact!

The team took some 28 year old film samples back to the lab from one of the greenhouses.  They ran it through the various tests, puncture, tensile strength, light transmission, etc. Ken watched in awe as the same tests were performed on brand new product.  The 28 year old film was within 5% on all tests.

This truly defies polymer science!!  Even the plants PhD polymer chemist can’t explain how this film does the impossible where longevity is concerned.  He does a very good job of explaining it’s other benefits and why it grows better plants faster than any other greenhouse covering in existence.

In the months following, agreements were drawn, and we received the rights to the product we named SolaWrap.  A star was born!

for specific question from your cell phone.

Please visit our Facebook page for more pictures and videos.